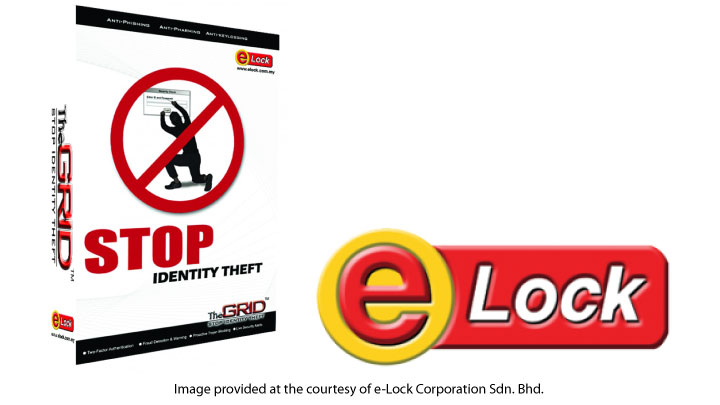 Persistence pays off for Local IT Security Firm
by Jason Cheah

The date 23 September 2014 would seem to be like just another day on the calendar.

However, this date is particularly significant for our valued client, e-Lock Corporation Sdn. Bhd. as it marks the happy conclusion of a long journey in pursuit of a U.S. patent for their invention.

e-Lock Corporation Sdn. Bhd. is an established player in the highly-competitive and constantly evolving field of information technology security. Established in 1999 as the brainchild of Dr. Ken Leong, although they are headquartered in Kuala Lumpur, their products are present in many parts of the world. Mindful of the importance of their technology they have approached and sought the services of Henry Goh & Co. to protect their intellectual property.

A first patent application was filed in Malaysia in May 2005 for a process and product for countering the threat of phishing called TheGRID™, which is included as a component in a number of their products. In view of the global reach of their business, corresponding applications claiming the priority of the initial Malaysian application were subsequently filed in Australia, Japan, Singapore and the U.S.A.

The Australian, Japanese and Singaporean applications were all successfully prosecuted through to grant in their respective jurisdictions, each facing varying degrees of formal and substantive objections in accordance to the patent regimes practiced in each jurisdiction.

For example, prosecution of a software based invention in Japan was relatively difficult due to the high standards for such inventions set by the Japan Patent Office, with a total of three Office Actions being issued and overcome.

The first was a Non-Final Office Action issued in April 2008 which contained rejections over certain claims being directed at non-statutory subject matter and to all claims for lack of inventive step. A response which involved amending the affected claims to recite a system, and submitting arguments which distinguished the invention over the cited documents was filed in September 2008.

The U.S. Examiner was not persuaded by the arguments submitted in the response filed, and a second Office Action (a Final Office Action) was issued in November 2008 in which the rejection for lack of inventive step was maintained, and a new rejection of the claims directed to non-statutory subject matter was also raised.

Due to the lack of clarity in the rejection for non-statutory subject matter, a telephone interview was conducted with the Examiner’s supervisor to ensure that an appropriate response is filed, which had the positive result of the supervisor agreeing for the rejection to be withdrawn.

A response to the second Office Action was filed in March 2009, whereby an amendment of the claims supported by further arguments in favour of inventive step were submitted along with a Request for Continued Examination (as is required for a Final Office Action under U.S. patent law).

A third Office Action, a Non-Final Office Action was issued in October 2009. The claims rejection for non-statutory subject matter was withdrawn at last. However, the U.S. Examiner maintained the claims rejection for lack of inventive step, and raised new counter arguments as the amendments and the arguments in respect of inventive step were not considered persuasive.

In tackling the third Office Action, the U.S. patent attorney proposed a further amendment and new arguments in support of inventive step. Another interview was conducted to discuss the proposed amendment and arguments with the Examiner before filing a response. The response to the third Office Action was filed thereafter in March 2010, incorporating both the U.S. attorney’s proposal and the Examiner’s suggestion made during the interview.

In spite of the careful effort, the response to the third Office Action still was not deemed persuasive and a fourth Office Action (a Final Office Action) was issued in June 2010, in which the Examiner disagreed with the amendments and arguments filed and raised further counter-arguments.

By this time, since the Office Action was made final, and in view of the Examiner’s persistent refusal to consider the responses filed to date and insistence in maintaining essentially the same claims rejection, the recommended course of action was to proceed with an Appeal in the hope of bringing about a reconsideration of the case.

A Notice of Appeal was accordingly filed in September 2010, followed by the filing of an Appeal Brief in November 2010.

This was followed by the Examiner’s Answer to the Appeal issued by the USPTO in February 2011 which disappointingly repeated the same rejections and arguments raised in the previous Office Actions. At this juncture, the options for responding was to file a reply, file a request for oral hearing, file a request for both, or take no action.

After consultation and careful consideration, the applicant decided on the option of filing a request for an oral hearing before the USPTO, which was filed in March 2011.

A Notice of Hearing was issued by the USPTO in October 2013 informing of the date of the oral hearing which was scheduled for January 2014.

The oral hearing took place as scheduled and was attended by the U.S. patent attorney who presented the applicant’s arguments, and the outcome was the USPTO’s Patent Trial & Appeal Board’s decision to reverse the Examiner’s claim rejections. A new claims rejection of two claims being directed at non-statutory subject matter was also raised. The new rejection was easily dealt with by the filing of an amendment in March 2014.

The Notice of Allowability was subsequently issued by the USPTO in May 2014. Finally, light at the end of the tunnel at long last!

A long and troubled journey which first started in May 2006 has finally been brought to a fitting and well-deserved conclusion.

The applicant’s recognition of the importance of their intellectual property coupled with their willingness to press in and persevere in this matter has finally paid off. One lesson that may be brought home is that although patent prosecution in the U.S.A. (or any country for that matter) can be difficult and protracted, it is indeed possible to push through and reap the reward.

Another lesson to consider is that the key patentability hurdle for software-based inventions would appear to relate to inventive step, and even after the differences between the claimed invention and the prior art has been established, there is still the matter of convincing the Examiner in no uncertain terms.