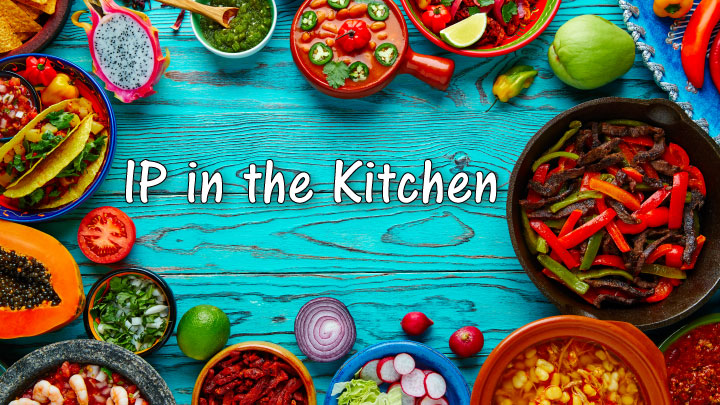 IP in the Kitchen
by Lim Eng Leong

In Malaysia, good food captures the heart of the nation and unites us as one. Malaysians will travel far and wide just to try out that newly-discovered food craze, cook up a storm for family and friends for various occasions or during one of our many national celebrations. A common greeting when Malaysians meet each other is “Dah makan?” (or “have you eaten?”).

The origin of certain cuisine or dishes can be a sensitive topic within this region and friendly disputes over coffee on such issues may escalate into passive-aggressive food wars among nations. To name a few, there are numerous on-and-off debates among Malaysia, Singapore and Indonesia relating to the origin of beloved dishes like chicken rice, “bak kut teh” (pork ribs in herbal broth), “nasi goreng” (fried rice), “yee sang” (raw fish salad) and the list goes on.

With food being at such a forefront of the Malaysian (or any) culture, surely certain food creations do deserve some form of intellectual property protection after having taken much creative knowledge, skill and effort to concoct; both to satisfy the palates and impress the hearts of their diners. However, any IP protection in the kitchen must not favour the creator to the extent of a food-monopoly or denying the public from enjoying similar creations from different chefs.

All good food originates from a great recipe; often a secret recipe. From that family recipe passed down through generations to well-known consumer food products (think the Coca-Cola formula or KFC’s eleven herbs and spices), one of the best protection methods is treating the recipe as a trade secret. The invention or Ingredient X is never disclosed other than to a select few, it never leaves the kitchen and all staff or collaborators have to sign non-disclosure agreements. The secretive nature of the recipes makes the resulting food all the more desirable and easily marketable.

Copyright laws protect food and drink recipes to some extent. They could be copyrighted to control the manner in which a written recipe is used or circulated if they are expressed in a very specific or original manner (e.g. detailed list of ingredients and particular method of preparation in the form of a cookbook). However the idea of making a dish itself (for example, the concept of tom yum curry) cannot be protected and people cannot be prevented from making the dish in their own kitchen or writing down their own descriptions of how to make it from experience.

In contrast to the above, nowadays renowned chefs become big celebrities and top restauranteurs and they do so by freely sharing their recipes (their secrets!) in cookbooks or on popular cooking shows. They are not the faceless chefs slaving in the kitchen but are proud to promote their cooking methods (and themselves!) to a willing audience in a “learn from me and you can do it too!” attitude. Thus, when the chefs take on a famous persona, trade marks become an integral part of their branding strategy. Their names and faces act as a trade mark and become multi-million dollar branded industry. The more they share and cosy up to the public, the more famous they become and their personal brands grow stronger. Most of us would have heard the likes of Jamie Oliver (the Naked Chef), Martha Stewart and Nigella Lawson (the Domestic Goddesses), Gordon Ramsay (the Angry Chef), Martin Yan, Julia Child and our very own Chef Wan; attempted their recipes for ourselves or dined in one of their many restaurants. Other examples of successful trade marks immediately associated with a specific food product would be McDONALD’S for burgers and fries, HEINZ for baked beans, COCA-COLA both for their drink and memorable silhouette of a bottle and TOBLERONE for the distinctive shape of their chocolates.

More than such traditional food brands, even the names of individual dishes themselves have proven potential to be valuable; especially if they gain enough traction and substantial public following to catapult into the latest food craze. One recent fad in the food scene is combining existing food products to become the likes of the Cronut (fried and glazed doughnut and croissant dough), the Ramen Burger (two cakes of fried ramen replacing the bun), the Pizza Burger (baked burger bun with pizza toppings) and Dessert Pizza (sweet instead of savoury pizzas). While the idea behind the dish and how to make it may not be fully protectable, a distinctive name like CRONUT may prevent other traders from selling similar items using the same registered trade mark. The power of trade mark-exclusion can be more practical and valuable in the long term (renewable every ten years to perpetuity) than any attempt to prevent the use of a recipe (limited copyright duration) itself.

From the home kitchen, IP protection for food can and have expanded to the industry-level; in the laboratory and factory. Food produced by merely combining conventional ingredients using standard cooking techniques may not fulfill stringent patent standards on novelty and inventive step, but innovations made in food technology often results in qualifying and patentable inventions. Food patenting can extend to the composition (newly-invented ingredients) of the food itself, the processing methods, food safety measures, new packaging features with better storage abilities, processes involved in the delivery of food to the consumer, etc. For example, the first machine for creating candy floss was patented by a dentist in the late 19th century and the resulting candy known as Fairy Floss is a registered trade mark. A chocolate recipe is much too commonplace to be afforded patent protection but a novel way of production can receive good news from the patent office. Patent rights were granted to a method of making chocolates that do not melt and on the trade mark front, we have all come to recognise the distinctive slogan “Melt in Your Mouth, Not in Your Hands”.

While IP laws alone do not provide the full answer towards safeguarding proprietary rights in food, each specific branch of IP can extend some form of protection to various stages in the food sector. IP protection is clearly a necessity in guaranteeing that the creator’s product remains unique, competitive, recognizable to consumers and profitable for many years to come.