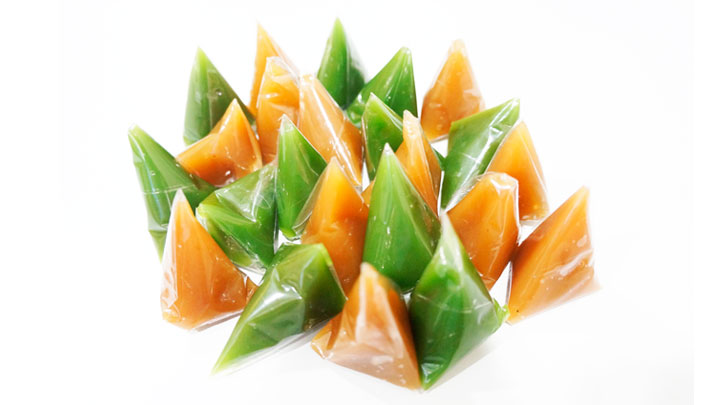 ‘Dodol’ is a thick, sticky and sweet toffee-like confection made from coconut milk, jaggery, and rice flour. It is popular in many parts of South and Southeast Asia, including Malaysia. When it comes to such local delicacies in Malaysia, Tan Kim Hock is the undisputed go-to brand for locals and tourists looking to savour these sweets. Its name-sake Mr. Tan Kim Hock (together with his late wife) created varieties of the dodol such as the durian dodol, coconut dodol and coconut biscuits; selling them from door-to-door since the 1950s before the company, Tan Kim Hock Tong Seng Food Industry Sdn Bhd (“TKHTS”) was incorporated in 1975 in the historical state of Malacca.

In 1976, TKHTS filed a trademark application Number M/072924 to register the mark

which was confusingly similar to the TKH trademark) were still being sold at the TKH Product Centre. The plaintiff also raised concerns that since its dodol products are certified ‘halal’ (kosher) according to Muslim laws, whether the similarly-branded dodol by the defendants are actually ‘halal’ certified as well. Otherwise, it will jeopardize the plaintiff’s reputation.

Premised on the above, a Trade Description Order (“TDO”) was granted by the court in 2014 to TKHTS and a raid on TKH Product Centre was carried by the enforcement unit that same year. This case was an application by the defendants for leave to intervene and set aside the TDO. They claimed that Madam Siah, who started working for Mr. Tan in the 1970s, co-created the trademark. They further alleged, among others, that (i) the TKH mark as registered in 1976 has been abandoned through non-use; and (ii) when Mr. Tan sold his interest in TKH Product Centre to Madam Siah, it included the goodwill and the mark concerned.

The High Court found from the evidence tendered in court that it was not disputed that the TKH trademark is valid and the plaintiff has acquired substantial reputation and goodwill in the mark. The infringing products bear a confusingly similar trade mark and the only missing part is the words “CAP POKOK KELAPA” or “coconut tree brand”. As for the defendants’ claim that TKHTS has failed to prove that the registered trademark in its entirety (including “CAP POKOK KELAPA”) has ever been used in any of their products at all material times, the Court held that Section 23(2) of the Trade Marks Act 1976 is relevant:

“Where under this Act use of a registered trade mark is required to be proved for any purpose, the Court or the Registrar may, if and so far as it or he shall think right, accept use of an associated trade mark or of the trade mark with additions and alterations not substantially affecting its identity as an equivalent for such use.”

With or without the words “CAP POKOK KELAPA”, the dominant feature remains the T device of a coconut tree, which is used on the TKHTS’ dodol. Since the plaintiff has been using the registered trademark with slight and acceptable modification, there can be no intention to abandon the mark. So long as there is a registered trademark and the same has been infringed, that formed the basis of the TDO.

To aggravate matters, the ‘halal’ certification granted to the plaintiff to be affixed on its products were found (during the raid on TKH Product Centre) used by the defendants for a few hundred seasoning packs of Bak Kut Teh (a usually non-halal meat dish) bearing TKH trademark as well. Thus, not only was there an abuse of trademark rights but also the ‘halal’ certification.

What’s in a Name?
by Natasha Chuah

What’s in a name? Everything it would seem. In today’s celebrity-filled landscape, it takes but a few moments for us ...

As the world continues to grapple with the Covid-19 pandemic, it is business as usual for innovators to develop new ...

Exceptions to the First Ownership Rule
by Carmen Low

It is a commonly accepted principle that copyright ownership lies with the author of a work. In Malaysia, it is ...

The Covid-19 pandemic which wreaked havoc across the globe in the early months of 2020 has since brought rapid changes ...